On Saturday we left the hotel in the jungle by bus. As mentioned, it rained like crazy the days before and driving off road was a challenge. When going uphill, the bus slipped one way off the road which was really scary. We needed to get out of the bus and walk a bit until the road was getting better.

Once at the destination, everyone needed to pee... It was so fun to see all the girls peeing next to each other in one row in the wild - I call this next level in getting to know each other haha. This wouldn't be the last time and many toilet visits in the wild followed the rest of the day and the following days.

During the day, it was pouring rain again.. I guess that happens when you visit a rain forest. The bike ride was average in difficulty as well as in length which was good as we went to visit our sponsor children today! We were welcomed with firework and by so many beautiful families who were so grateful to meet us. After a dancing performance by 2 girls, we were introduced to our sponsor child. My heart literally melted. My sponsor child has the sweetest innocent though mysterious smile I have ever seen and her eyes were filled with hope and joy of life. Her family was amazing and so sweet as well; her twin brother, her older brother, her mum and her dad. I was really happy to see that her parents wanted this girl to go to school and to progress in life instead of simply helping them out in the house (this is not a given in Guatemala and often they are told to take care of the house/cleaning duties). However, even though their intentions are right with this girl, they don't have sufficient funds to enable all their children to go to school. I am so happy that we, together, managed to give her the future she deserves. Thanks to all of you sponsors!

At the end of the day, we were all still soaked due to all the rain and hoped to get a warm shower but unfortunately, this was wishful thinking. It took me 2 hours to warm up after the cold shower. But hey, after what I had seen that day, I think we shouldn't complain about this. By the time we got back, I was super tired after a long day - the biking, my grandparent's funeral which I couldn't attend was today and a really special but also confronting meeting with my sponsor child (confronting as in how life can be as well if you don't grow up in a country such as the Netherlands). I decided to go to bed early and recharge for tomorrow.

The morning started good. There is a biking shirt rotating between the biking participants which is given at the start of the day to the one who deserves it most that day (e.g., someone who biked really well the day before, someone who had a rough ride etc.). Today Marieke gave it to me as a gesture to the situation with my grandparents. This was sooo sweet, thank you Marieke!

Sunday was the most beautiful but also the heaviest bike ride ever. Not only because of the climbing and the road itself, but also because it was the longest distance we had to ride during the whole week. We started off-road with descending relatively fast. And for the ones who never rode a mountainbike - descending is not that heavy when you are riding on a normal road...but when you go off-road it's technically so challenging and one little mistake can lead to serious injuries. The full ride down hill you have to tense so many muscles in your body to control every move whilst at the same time trying to go as fast as possible. This is exhausting to the max (most of the times you are squating above your bike seat ;) ). However, this is also adrenaline flowing through your bones!! After a long off-road and dangerous descent, there was an 11/12 km climb waiting for us, a really really heavy climb. To be honest, I think I have been the proudest of myself during this part of the biking trip. I managed to get to the top of the climb as the first participant without any unofficial stop/pauses!!! I never thought I would have been capable of this, but I noticed that biking might be about being fit but even more so about mentality. I stopped thinking how much was still ahead of me, all I thought was press that one leg in front of the other and focus on keeping your breathing as normal as possible. Think about your next move only, one by one and balance your energy. I managed to do the last part of the climb solely on my winner's mentality and the personal incentive I had for today's ride.

Besides the ride being heavy, it was also a day where we were amazed by beautiful scenery. Oh my how beautiful Guatemala is! It's also amazing to see how each region has its own climate and vegetation and how much diversity there is in one country. During one bike ride, you get to see plenty of different micro ecosystems. And yes, the rain stopped as well as we were heading out of the jungle. Today it was pouring sweat instead and sometimes it felt like biking in a sauna ;). Once at the top of the climb, I started to feel goosebumps which is not necessarily a good sign. The doctor had to put a wet towel in my neck and poured cold water over my head to make sure I wouldn't become overheated. Luckily this worked really quickly and once other cyclists were getting to the top as well, I soon noticed that almost everyone needed the same treatment.  The wonder towel worked for everyone - well done doctor Lise!

On Monday we "only" had 36km planned so we all thought it would be kind of a "rest day". Soon we found out that this would be a pretty tough 36km ride with an even tougher off-road sandy climb. The temperature was getting hotter and hotter and the legs started to feel like spaghetti a bit (the previous days were starting to have it's effect on the body). However, we all made it! In the afternoon, we had a little tour through Chichicastenango to see the traditional Maya highlights. In the evening we went out for dinner in a nice and cosy restaurant.

The next day, we did a lot of off-road biking and the temperature was warming up even more. Again, the bike ride contained a lot of climbing. The views were so worth it though, we arrived at Lake Atiklan! Such a beautiful area again. We ended the evening with some dancing in a restaurant and had a few beers, all a bit nervous for the day ahead of us as the steepest climb was awaiting us.

Today was the steepest climb - in total 3km of climbing with parts of 20%!! It was around 36 degrees but still most of us managed to finish the climb. So proud of our group. I was sweating like crazy but again, managed to switch off my thoughts and just focused on my breathing and made it till the end of the climb!! Literally, ain't no mountain high enough :). The climb was worth what was coming next though, descending with a lot of speed with breathtaking sceneries! How strong I appeared to be with climbing, descending was harder for me. Allthough I managed to do all the descending as well, I noticed I got a bit afraid of the speed with which we went down and the sharp corners we were taking. Most people said that they were thinking "shit, after every descent, there is a climb waiting for us", I was thinking "shit, after every climb, there is a descent waiting for us" haha, I have always been a bit of an odd one ;). However, I didn't let my fear stop me and managed to do all the descents of the trip :). May it be with a little bit less speed than others and although I was the first to arrive with the climbs, with the descents I was always one of the latest arriving at the stops ;). Once arrived at the hotel, we saw an amazing swimming pool and we had some time to relax and swim.

Today marked the last day of the challenging bike ride! Today would be a relatively easy day with close to zero climbing or descending... just biking flat for +-53 km. However, the temperature was the challenging part of the day.. somewhere between 36-40 degrees. The scenery was a bit less impressive than previous days and actually it looked a bit like the Netherlands but then 10x warmer and including palm trees ;). Reaching the finish was emotional. Many of us were spotted with a little tear and/or tears in their eyes. Because of what we've seen, the conditions in which many people and especially girls live in Guatemala, because of the exhaustion both physically as well as mentally but above all because of the feeling that we all DID IT!!! We managed to conquer this challenging bike trip. I am so proud of the whole group. After our celebration lunch, we went to a remote area to chill for 1.5 days on the beach. Literally remote as there was no WiFi and all one could do was swim, watch the sunset, the sunrise, sit on the beach, eat and drink. In the evening we made a camp fire on the beach and there was a speech of Marjolein of Plan Nederland to talk about each person's achievements/nice memories of the trip.

We still had a full day at El Paredón, just to relax and to recover. I spent about 2-3 hours on the beach just staring at the coastal line and the sun and reflecting on the last 1.5-2 weeks. What a rollercoaster, so many things happened at home and during my trip, I got to know myself even better and this trip really putted things into perspective again. What is important in life to me? Where do I want to go? How am I going to achieve this? And most of all, how lucky I am to be able to set my own directions...

Today, we went back to Antigua with a few participants of the group. We had a nice lunch at Hostel Selina after with Kim and I went to Cerro de la Cruz. As this was my last full day in Guatemala, we decided to go out for dinner with Lize, Marit, Kim and myself and a few of the local crew that has helped us during the trip!! (Oseas and David, thank you!!!). We had an amazing night with food and quite some Latin American dances, the dancing queen/king in all of us was ON. I loved it!

I had to leave for the airport early and although the last few days went really fast, I was also really happy to go home again. As soon as I stepped in the plane, I thought; I did it, I F***ING did it! now it's time to see my family again <3 the ones that I love the most. 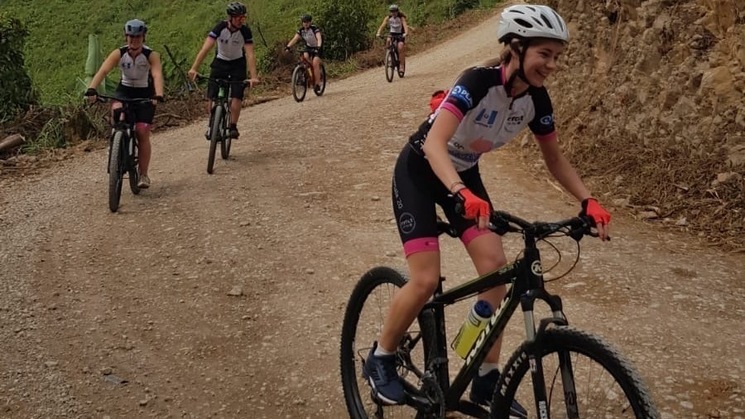